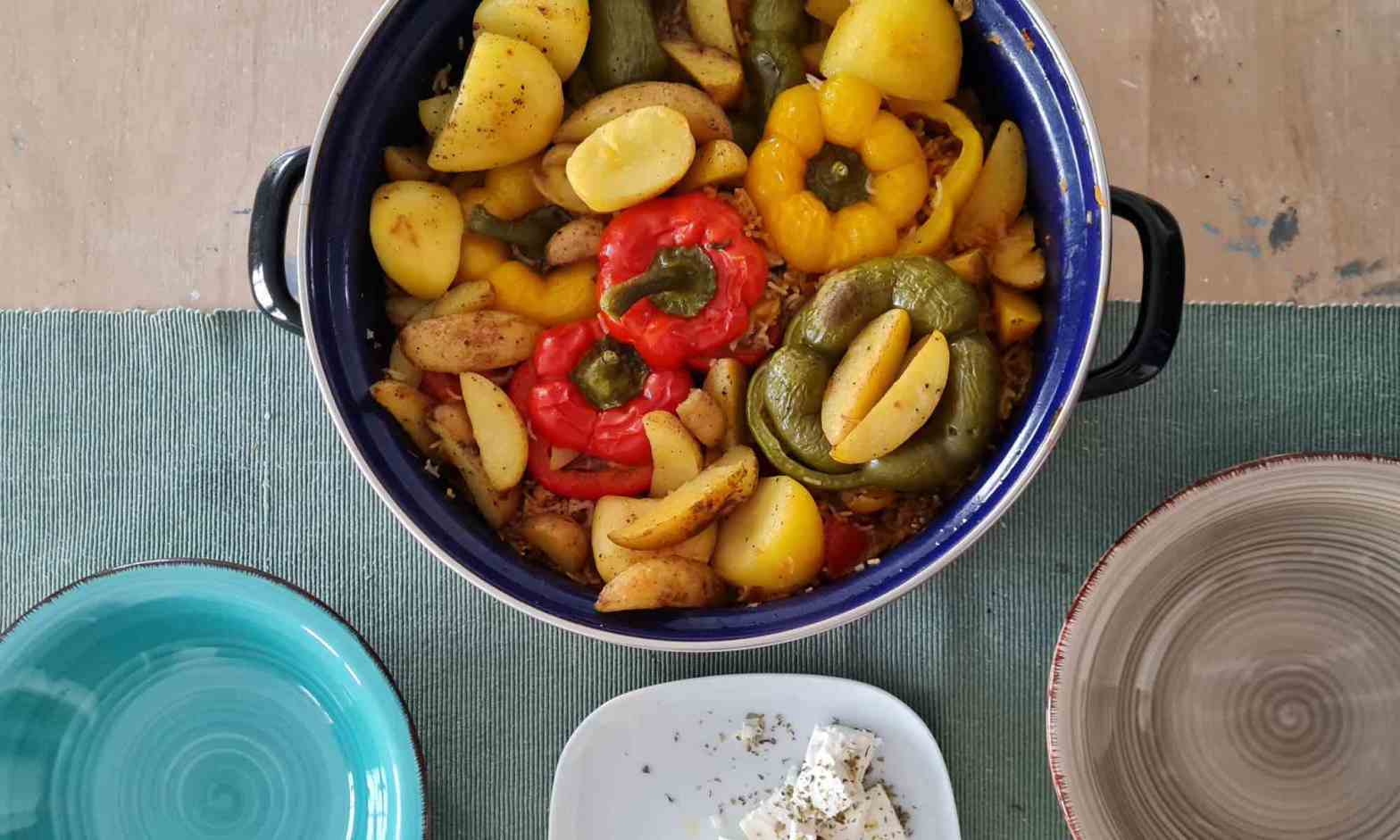 Is it possible to stick to a vegan diet in Greece?

The Greek restaurants abroad are mostly famous for their moussaka and mixed grill. Gyros, souvlakia, and keftedes dominate the image of Greek cuisine. Meat. With some feta cheese and olive oil to complete the true Geek taste. But is it true that the Greeks eat just meat? And what about a holiday in Greece on a vegan diet?

The Greeks don’t eat only meat

First things first. It is not true that the Greeks are only eating meat at home. Although there is a big variety in what’s on the menu in the different regions of Greece, the average Greek diet is pretty diverse. Gyros is to eat on the street and souvlakia are to celebrate. Greek mothers actually cook a lot of vegetables and legumes for their children. And when there is meat or fish, there is always a salad next to it.

It is a misconception that the Greek cuisine consists only of meat, created by the restaurants abroad. Greece actually has a higher than average consumption of vegetables in Europe and a far lower meat consumption than the US. Party due to the Greek salad that is eaten with every meal in Greece. But did you know that Greece has a lot of traditional recipes that use legumes?

Beans in the Greek culture

Traditionally, beans have always played a big role in the Greek diet. The Greeks are orthodox and with this religion comes a lot of fasting. 180 to 200 days a year, the Greek Orthodox Christians don’t eat meat, fish, dairy products, and olive oil. For more than half of the year, and at least two times a week, the traditional norm is the vegan diet. And as a result, there are amazing traditional Greek dishes based on legumes. Fava, fakes, or fassolada are just a few examples of the many tasty vegan dishes to choose from.

Apart from the religious reasons to eat beans, there used to be an economic one as well. The history of Greece knows many times of war and poverty. Legumes are cheap, filling, and easy to keep for a longer time. Especially in the Greek countryside, people kept beans in the basement underneath the house to feed the family in times of need. Even in the most recent economic crisis, which started in 2009, the consumption of beans in Greece grew.

Meat is wealth and celebration

Although beans are well known and fasting is very common, there is something that makes the Greeks unable to accept being vegan. Because, without meat or fish, how can you celebrate anything? Or how can you welcome guests to your house? Meat in Greece is a symbol of wealth and celebration. Family dinners, holidays, weddings, or just a friend coming over, all will not be complete for a Greek without meat.

Take my yiayia, she is fasting 200 days a year and lactose intolerant. Yiayia mostly eats delicious beans and fresh vegetables. However, every time I tell her I will visit, she panics. What to cook for someone who doesn’t eat meat? I tell her to just cook what she makes for herself. Trust me, yiayia’s cooking is amazing, even when it’s just bean soup. But even for her, it is impossible to welcome me into her house without meat and feta. She will spend hours in the kitchen preparing the most delicious kotopita (chicken pie) that we both won’t eat, just to have it on the table.

This might be again related to the Orthodox religion. For the Orthodox church there are a few exceptions when it comes to fasting. One of which is when “receiving another’s hospitality”. But also when you live with a non-orthodox roommate, fasting should be adjusted so you can still have family dinners. Being good to family and friends, overrules
dietary restrictions when fasting. However, the use of animal products in any situation is against a vegan’s believes.

The Greeks can’t have a table without meat, fish, or feta. Although fasting is accepted, the culture does not understand someone being completely vegan. Explaining to the Greeks that I don’t eat any animal products, is like telling them I can fly to the top of Olympus. Greeks even refuse to agree with me that their own bean recipes are in fact vegan. A fully plant-based diet is something that they just don’t understand.

The workaround when eating at out in Greece, is to say that you want their fasting food, nistisimo. This is the closest translation of vegan food into Greek. Be careful when ordering though, because nistisimo does not exclude shellfish or honey so check this yourself! Besides, many Greeks will not believe that a foreigner knows the meaning of nistisimo. Whenever yiayia orders nistisimo food, she gets vegan. While for me it used to be food with cheese and eggs. I now say nistisimo chories yala, tiri, kai auga, fasting food without milk, cheese, and eggs. Finally I get what I want, or I believe so at least. You really have to describe what you don’t want, and never use the word vegan!

Can you be a vegan in Greece?

Yes! But it all depends on where you stay and for how long.

If you do your own cooking with Greek ingredients, your food will be amazing. If you stay in Athens or Thessaloniki, you will easily find vegan food around. Even if you eat with a Greek family, vegan is a good possibility. But when you travel to smaller cities or even villages, things will get more complicated. Especially when you rely on food from taverns and bakeries, like me.

Every new trip to Greece, I start full of positivity about vegan food. There are many tasty vegan mezes you can order in almost every tavern in Greece. Options include grilled vegetables, mushrooms, and salads. There is a lot to choose from, however, none of these are full dishes. Living on these for a week or 10 days is fine, but not longer. I notice after a while in Greece how I am hungry all the time and extremely tired during the day. Living on the road in Greece, it is very difficult to get a proper vegan meal. I cannot replace meat with nuts, seeds, and legumes the way I should. And after a while my body does no longer have sufficient protein and calcium for example.

For me, it means that when I travel in Greece for a longer time, I will eat fish or chicken about once a week. Just to give my body what it needs and make my travel easy. But if you want to stick to your vegan diet in Greece while traveling, it might be smart to calculate some home cooking time into your itinerary.

Are there traditional Greek vegan dishes?

Yes! Traditionally, the Orthodox Greeks where eating according to a plant-based diet at least half a year! Examples of traditional Greek vegan foods are fakes (lentil soup), fassolada (bean stew), and fava (split peas puree)

Unfortunately not. In the big cities, like Athens and Thessaloniki, vegan restaurants are available. However, for many Greeks, vegans and vegetarians are strange and a plant-based diet is believed to be something fancy and expensive. Greece actually is amongst the countries of Europe with the lowest percentage of vegans and vegetarians.

Do Greeks eat a lot of meat?

Greeks believe in a balanced diet which does not exclude anything but also not includes meat on a daily basis. Salads are served with everything, and many home-cooked meals do not included meat or fish. Legumes and vegetables are widely used in the Greek kitchen.

Which Greek coffees are vegan-friendly?

Looking at the foam on a freddo espresso or frappe, you might believe these drink must contain at least some milk. Well they don’t! Frappe, freddo espresso and Greek coffee are all without any animal products. Besides, many Greek coffee places offer plant-based alternatives for milk, so you can even enjoy a (freddo) cappuccino.

The coffee you must try in Greece

Real Greeks love their coffee and they are really good at making it. As a result, every gas station, supermarket, shopping street, beach, and even ferry is equipped with coffee…

Whenever I travel to an unfamiliar destination, I am always happy to spot a McDonald’s right after I land. I can eat my beloved BigMac, without immediately having to learn…

One response to “Is it possible to stick to a vegan diet in Greece?”