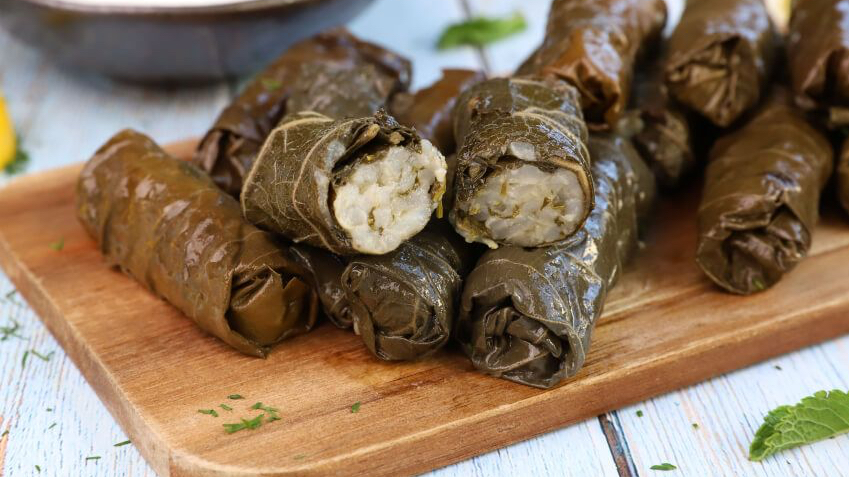 It is nearly impossible to have a bad meal in Greece. Feta, good olive oil, and fresh vegetables are able to turn any recipe into a delicious meal. Combine this with fresh fish or a souvlaki and you have heaven on a plate. Finding Greek vegan dishes, however, can be nearly impossible. Especially in smaller towns in Greece, it is difficult to stick to a plant-based diet. Greek main dishes at a traditional tavern often contain either fish or meat. But did you ever look at the starters? Meze’s is what they are called in Greek.

Read below to find the Greek vegan dishes that are served in almost all taverns around the country. Including their Greek name and the way to pronounce them. You should order around three to four of them to make a meal. Enjoy!

Μανιταρια πλευρώτους στο φούρνο – Manitaria plevrotous sto forno
Oyster mushrooms, grilled and served with vinegar, olive oil, and herbs. These mushrooms have an amazing texture and great taste! It is a super simple dish, but due to the quality of the used products it is definitely worth ordering. The Greek mushrooms are so good that they make a great replacement for meat.

Φάβα – Fáva
Creamy and super tasty split pea puree, cooked with olive oil, garlic, onion, and lemon. Fava is a Greek hummus, perfect to eat with some bread or pita. Originally this recipe is made with fava beans from Santorini. Here, the volcanic soil on the island gives extra sweetness to the beans that are produced. However, today fava is cooked all throughout Greece and available in almost every Greek tavern.

Σαλατα ντομάτα – salata tomata
Don’t be fooled by the name of this Greek vegan dish, there is more to it than just tomatoes. Tomato salad in Greece is short for the famous Greek (farmer’s) salad without the feta. Cucumber, onions, olives, and tomatoes, topped with herbs and olive oil. So simple, but so tasty.

Γίγαντας στο φούρνο – Gigantas sto fourno
Gigantes means giants, and sto fourno, from the oven. The name of this delicious traditional dish explains exactly what it is. Big white beans cooked in the oven with onion, tomatoes, olive oil, and many herbs. Sometimes, carrot and celery are added as well.

Πιπεριές Φλωρίνης – Pipėriés Florinies
Peppers from Florina, a region close to the border of both Albania and North Macedonia. The peppers’ taste is sweet and they are grilled and served with olive oil and vinegar.

Χόρτα βραστά – Gorta Vrastá
Gorta Vrastá is a super traditional Greek dish that is unfortunately, not for everyone’s taste. The dish is made with a wild vegetable that does not have a translation into English. The vegetable is boiled and served with lemon and salt, super simple. Personally, I am not a big fan of this recipe. However, you must try since it doesn’t get more local than this. When you are a big fan of lemon taste, you will most probably like it.

Παντζαροσαλάτα – Pantsarosalata
This beetroot salad is again a very simple Greek dish. The beets are cooked in foil inside the oven. Meanwhile, garlic, olive oil, and vinegar are whisked together in a salad bowl. Once the beets are done, everything is put together with some pepper and salt. Kali orexi!

Σαρμαδακια – Sarmadakia
This dish is absolutely one of my favorite ones in Greece Tiny handmade stuffed vine leaves that come in many variations. Rice with olive oil, onions, and a variety of herbs give taste to this dish. The leaves are usually eaten with tzatziki, but don’t let traditions prevent you from trying this dish. Eat without sauce or try with fava or melitzanosalata (eggplant dip).

Ντακος, χωρίς τυρί – Dakos chories tiri
Dakos is made with barley rusks, a specialty of Crete called kritharokoula. This rusk is a hard, twice-baked bread and is topped with olive oil, tomato, and greek cheese. Some taverns add capers or olives as well. Dakos is traditionally a recipe from Crete and perfect for warm summer days. Although this is officially not a vegan recipe, it is definitely worth trying. Just order them without, chories, (feta) cheese.

Κολοκυθάκια τηγανιτά – Kolothàkia tiganita
Last but not least, my favorite vegan traditional Greek dish. Kolothàkia are fried thin slices of zucchini covered in a dough that is made of flour with either water or beer. You can eat them with fava, melitzanosalata, or even just mayonnaise or ketchup. They are better than potato fries!

Is it possible to stick to a vegan diet in Greece?

The Greek restaurants abroad are mostly famous for their moussaka and mixed grill. Gyros, souvlakia, and keftedes dominate the image of Greek cuisine. Meat. With some feta cheese and olive…

The ultimate snacks for your summer road trip in Greece

When going on a road trip in a foreign country, it might be hard to find good snacks along the way. Where to go and what to buy? If you…