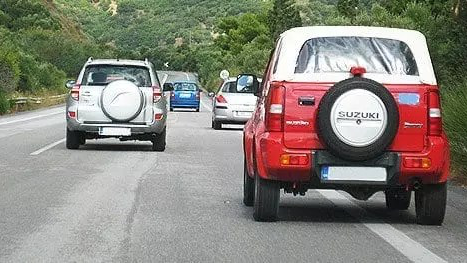 Greek driving and lanes. There is always one more

The Greeks have to do almost everything by car. Going to work, picking up the kids, and doing groceries. Because of this, the roads are way too crowded, especially close to and inside the big cities. But Greeks and patience don’t go well together and so, Greek driving was invented.

In this article, I will explain to you everything you need to know about the use of lanes in Greece. Or actually, how Greeks ignore their lanes. Although the rules below are not the legal way to drive in Greece, understanding them will make your Greek road trips much safer and can prevent accidents.

Until recently, Greece did not have real highways. The main roads consisted of single lanes, often through the mountains, with steep inclines and sharp turns. From the 2000s and with the help of the EU, Greece started constructing highways. For many Greeks, this came with a new lane they had never seen before, the safety lane.

Unlike any other country, where safety lanes, or shoulders, are only used by emergency vehicles, breakdowns, or evasive actions, Greeks interpreted the safety of this lane in another way. To make driving in the chaos that is the Greek traffic more safe. And although using the shoulder the Greek way is illegal, the police do allow it because, in the end, it does improve safety on the Greek roads.

Greeks are always in a rush, except for a few of them. When a road has a maximum speed of 100 km/u, most of them will drive at least 120 while a few decide to go safe and drive with just 60 km/u. And this is dangerous. But, the slow car wants to drive safe there is a spot for him on the road. The shoulder! Makes sense right? Safe lane for safe drivers.

The second safety purpose of the shoulder is safe passing. Like I said before, maximum speeds are really just an indication for the real Greeks. As a result, there is a wide variety in speed on every road. So even when you follow the maximum speed of 100 km/u, there might be someone going 140km/u behind you. In this case, the Greeks expect you to move to the safety lane. Use the safety lane for letting someone pass safely.

The last Greek rule regarding safety lanes is one that you actually do need to know before you get on the road in Greece because not understanding the Greek way of thinking here can cause a serious accident.

Imagine you’re driving on a Greek national road. Both directions have one lane and one shoulder. Coming towards you is one truck on the safety lane, one car slowly passing this truck on the normal lane, and a third car, passing the other car. The danger is in this third car because he will be driving on your side of the road. The driver will expect you to move to the safety lane so all four of you can safely pass each other. In this situation, it is very important that you do.

When Greeks are diving Greek and you want to stay safe, use the safety lane!

Lanes in the city

Now that you understand the Greek mentality regarding lanes on a road, there is one more situation I want to prepare you for. Imagine rush hour in a big city in Greece. You’re on one of the main roads with two or more lanes. The traffic towards you is stuck while your direction is almost without traffic. You’re approaching a traffic light, what can you expect to happen?

Some inpatient Greeks will use a lane that is supposed to be for you. Especially at the traffic light, they will pass the line of waiting for cars from the right and as soon as the light turns green they will use your lane to either get in front of the cars on the propers lanes or, like my father-in-law, they will just keep driving one the lane for traffic from the opposite direction, your direction. Again this is totally illegal, and definitely don’t do this yourself, but be prepared that this can happen. Stick right and drive defensively.

The ultimate snacks for your summer road trip in Greece

When going on a road trip in a foreign country, it might be hard to find good snacks along the way. Where to go and what to buy? If you…

Driving in Greece. The basics

No western driving school can prepare you for driving in the chaos that is the Greek traffic. However, I can truly recommend exploring this amazing country by car, since other…

How to get around in Greece?

Greece is a beautiful and diverse country with a rich history and culture. Whether you are planning a vacation or a longer trip to Greece, it is important to know…