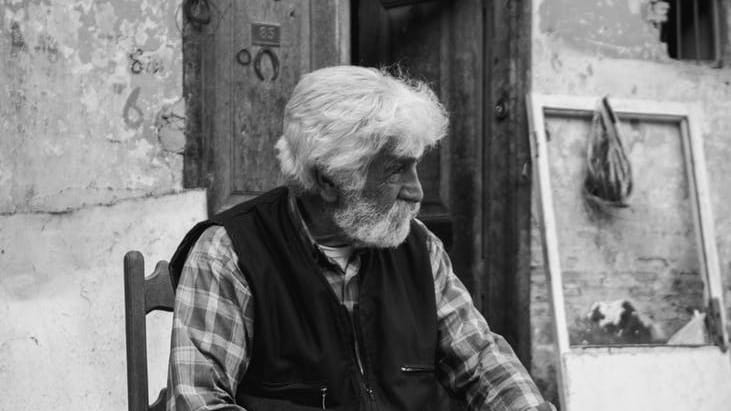 While strolling around a Greek town or village, you might be surprised by an abundance of facial hair. And abroad, you are often able to recognize the Greeks by their beards as well. Although Greek men have a variety of facial hair, from mustaches to stubbles to full-grown beards, not often do you see a Greek cleanly shaved. Did you ever wonder why most Greek men have a beard?

Charles Darwin hypothesized that the process of sexual selection may have led to beards. Modern biologists agree that a beard shows sexual maturity and dominance for both animals and humans.

But according to this theory, it does not make sense that just us, Greek men, showed off our manliness by hair. And this is also a misconception.

It is not true that one ethnic group is more “hairy” than another. All humans have more or less the same amount of hair follicles. But the size, length, and pigmentation differ. This creates the illusion that some people are hairier than others.

Throughout history, our genes adjusted and mutated due to the environment. As a consequence of gene mixing and climate effects, Greek men tend to have darker, thicker hair, which can be noticed as a richer beard. Especially compared to the much lighter northern European ones.

However, darker hairs are not an excuse for growing your beard. Of course, shaving machines and razors are available in Greece, but we tend not to use them as often. So, what are the reasons that Greek men let their beards grow?

Even though many people may associate a beard with poor hygiene, this is not true. A well-maintained beard can have several health benefits, including:

The history of the Greek beard

For the ancient Greeks, beards were a sign of wisdom, manhood, and the pivotal moment from childhood into adulthood. Bearded men were highly appreciated in ancient Greek society. Socrates, Homer, Plato, and Pericles all had a beard, and even Greek gods were portrayed with a beard. In Homer’s Iliad, Achilles’ mother, Thetis, asks Zeus to swear by his beard, which makes his promise sacred and inviolable. The beard was an obsession in ancient Greek times.

During the era of Alexander the Great, the high status linked to a beard, was diminished. The great general was a big fan of the clean-shaven look. But he also believed that a beard could be used by opponents to grab on to during combat. He ordered all soldiers to fight without facial hair.

However, the identification of the beard as a symbol of age and wisdom arose among intellectuals. The philosophers of this time usually refused to shave. And later on, the beard came back to Greece. The Romans distinguished themselves from the Greeks by being shaved.

In the Byzantine era, the beard was emphasized as a sign of masculinity. At this time, an important role in court governance was played by eunuchs. These men did not produce testosterone and could not grow beards. Therefore, the presence of a beard proved that the man in question was anatomically complete. For this reason, to this day, the masculine is called “βαρβάτος”, barbatus, bearded.

During the Late Middle Ages, a shaved look was again the norm in Western Europe. This trend was linked to the imposition of celibacy on the part of priests. A trimmed face contributed to declaring the sacrifice of their male reproductive power. Again the presence or absence of a beard separated the Greek from the Latin.

From the beginning of history, humans used clothes, accessories, and even their bodies to indicate their social and economic status. From ancient Egypt until today, a beard can have many meanings. The length, the style, or even the absence of it. The meaning and status of the beard changed multiple times throughout history and will continue to change.

In Christianity, art depicts Jesus and many biblical characters such as Moses and Abraham with a beard. Most Orthodox Saints are portrayed with beards as well, thus for the clergymen, facial hair was an “inviolable law”.

Tradition is an important factor as well. The majority of the Greek heroes do not wear a cape, but they have beards. And who were the everyday heroes in Greece? The sailors, the captain, and the fishermen. They all maintain a beard.

Also, during mourning, we tend to grow our beards long. It is an Orthodox tradition, not to shave for at least forty days after a loved one passes away. However, during the 20th century, beards were not appreciated by the average domesticated Greek. They were a sign of dirty and rebellious youth, only to be worn by the hippies and the communist.

Nowadays, the younger Greek men do maintain a beard for various reasons. As I mentioned earlier, we believe that we look more masculine and wise, which results in more confidence.

But I consider convenience the most important reason! It is easier for most of us to grow our beard and trim it once per week or month than to develop a daily routine. We prefer to use those 10 minutes a day, to drink our coffee, talk with a loved one, or even take a nice afternoon nap.

Read more about the Greek culture

Traveling through Greece, you might have noticed all the old men, endlessly sipping coffee in front of a traditional kafeneío. These men seem to be a static part of the…

Whoever believes that time in Greece is EET, Eastern European Time, is wrong. Although the Greek clock may tick according to EET, real Greek time is a totally different concept.…

Everyone is a child in Greece

The meaning of the word child in Greek is unlike its translation into any other language. While for most of us, a child is a young human being. Either below…