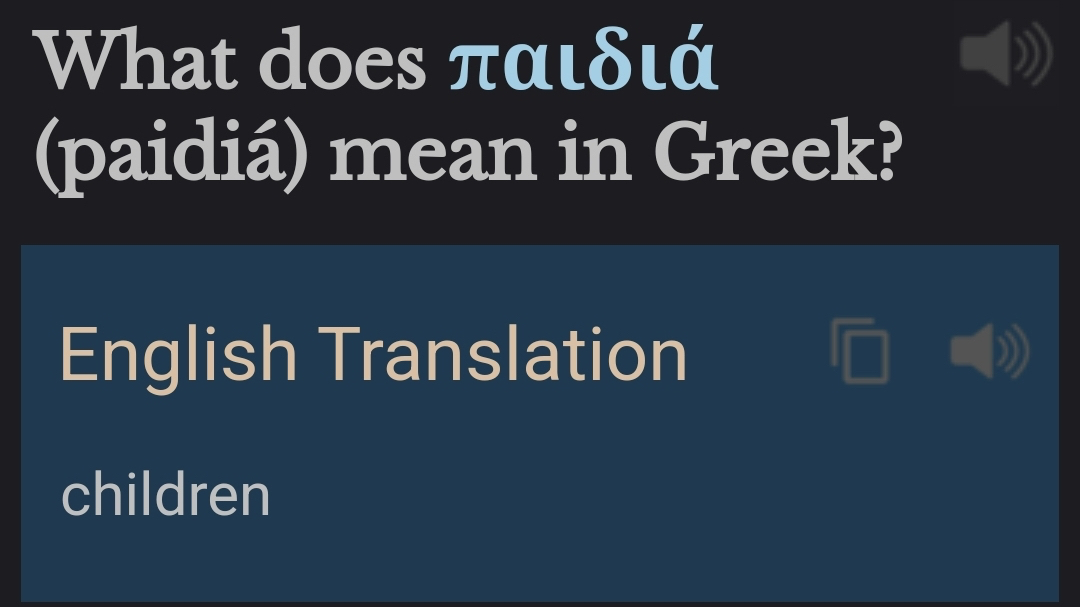 Everyone is a child in Greece

The meaning of the word child in Greek is unlike its translation into any other language. While for most of us, a child is a young human being. Either below the age of puberty or below the legal age of majority. In Greece, everyone can be called a child.

Imagine a Greek family hanging out at the house. There are three generations, your parents, you and your boyfriend, your sister with her husband and their children. When lunch is ready, your mother says: éla, paidia! Come, children!
Who is she calling?

Now your sister is calling with her friends about going out that evening after lunch. At one point she says: the paidia are at my parents!
What does she mean?

I would translate this into let’s go out! My parents are taking care of the kids tonight so I finally have some free time to do what I want. But not in Greece. Again you are the child and it means that she will stay in with the family.

To make things even more complicated. Now your sister goes home to get her children and while she is away your mother says to you: the paidia are coming tonight!

Now your mother is not talking about you, nor is she talking about the children of your sister. Instead, the sister that just called you a child is now being referred to as the child as is her husband. Everyone is a child in Greece.

Let’s move to a different setting. You are thirty years old and just reached your hotel somewhere in Greece. When you drive up to the parking you pass a swimming pool and playground, both packed with children. Suddenly a woman pops up in front and says: edw, paidia! Here, children!
What does she mean?

Off course she is not the mother of some of the playing kids you just passed, calling them inside for whatever. No. It’s Greece! This woman in the owner of the hotel, telling you to follow her to the parking lot.

Last one! You’re with a group of friends, having dinner at a tavern. Dessert is finished, the bill is paid and you want to leave to go to a bar for a drink.
What do you say?

Probably you get the idea now, pame paidia! Let’s go children! Is the correct answer.

No one ever grows up. Everyone is a child in Greece.