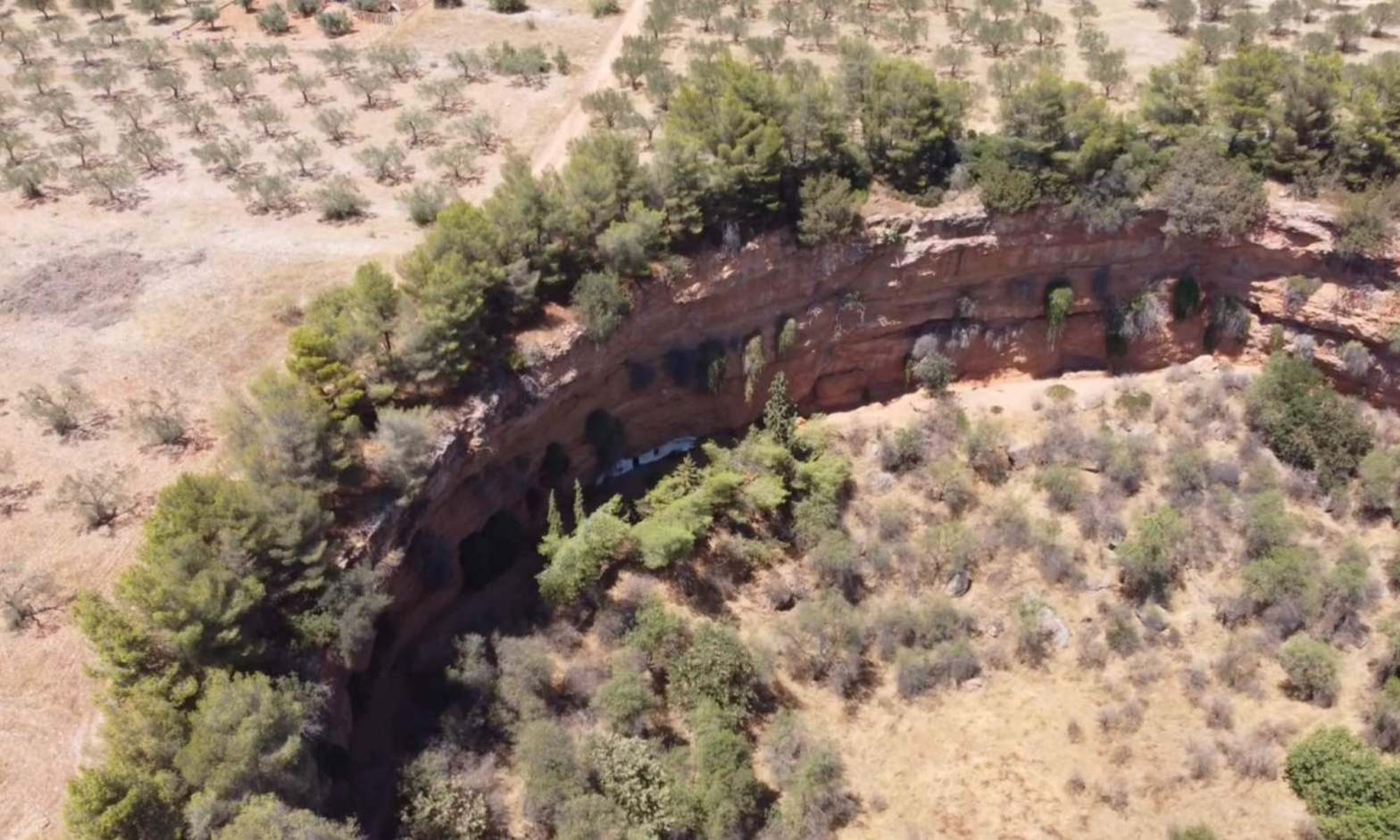 Meteorites, UFOs, or rebellious priests? The dolines of Didyma

In the Argolis region, in the North East of the Peloponnese, satellites reveal a rare geological phenomenon. Two big green circles not far away from each other. The dolines of Didyma. These dolines are not the first thing you will find in any Greek tourist guide. However, they are impressive and unique natural landmarks.

The village of Didyma

Didyma is a small farmers’ village on the foot of the mountain, also called Didyma. The name shows the importance and the connection to the dolines. Didyma in Greek means twins. And the twins this name refers to are the two sinkholes close by.

In spring, something unique happens in the village. The fields around Didyma fill with a rare orange-red tulip. Every year in April, these beautiful flowers are celebrated with a festival. So when you’re around during this time of the year, don’t forget to attend this colorful event.

What is a doline?

A doline is “a shallow funnel-shaped depression of the ground surface.” Dolines are also known as sinkholes, a term that might trigger your imagination. Dolines appear when water and carbon dioxide underneath the earth’s surface dissolve the limestone in the ground. The earth collapses, and a hole is created. This process can happen gradually or suddenly. But the result is the same, a circular hole in the ground.

Usually, dolines have a pool of water at the bottom. Like the famous caves in Cephalonia, for example. In Didyma, however, there is no water at the bottom. Just lush green vegetation. Because of this, scientists are not one hundred percent sure the dolines of Didyma are the dolines described above. They might result from natural gas explosions, which can explain the amount of debris inside them.

The myths of Didyma

Although modern geological knowledge can justify the existence of the dolines of Didyma, this has not been the case in the generations before us. The sinkholes have, therefore, been the subject of many great stories the locals still tell today.

The most known story is about meteorites. Two of them crashed into the earth just outside of Didyma. As a result, the two green craters mark the landscape today.

Another explanation is extraterrestrial life. Aliens. They came in their UFOs to Didyma and crashed into the earth upon landing. Leaving two perfectly circular marks in the ground. The sinkholes.

The third explanation is (of course) a story of the Orthodox church. A rebellious priest who worked on the name-day of Agios Georgios. A day of celebration for the church, on which work is prohibited. The earth collapsed underneath this priest when he said bad things. But what about the second doline? Maybe the priest had a rebellious twin brother?

The dolines are called mikri and megali Spilia, the big and the small cave. Throughout history, the dolines have been used as caves. Natural voids, able to provide shelter from bad weather and enemies.

The age of the dolines at Didyma is unknown, but they have been around long before even the ancient Greeks. Stone tools from the prehistoric age (4.000 – 2.800 B.C.) have been found inside the dolines. Proving that the dolines have been inhabited for centuries.

The churches inside the small doline date back to the Byzantine era. During this era, many priests choose to lead a solitary life in huts or caves. Both churches are a result of this and started as nothing more than a cave inside the doline. A place to practice the orthodox faith. Alone in peace.

Later, during the Turkish occupation, the dolines of Didyma have been a place for shelter and protest. Due to the enclosed and hidden shape, the Greeks used the space to make ammunition to fight their occupants.

Visiting the dolines of Dydima

Following the signs to the dolines, you will first find Mikri Spilia, the small cave. Don’t expect an impressive view of the doline upon arrival. Instead, you will find a small grey fence in between many trees. Inside this fence is a narrow hole carved out of the red ground. This hole marks the beginning of a staircase which leads you down into the doline.

A tunnel with white-washed walls encloses the narrow staircase. Halfway down, you will find a natural skylight which might have been an older entrance. Only at the end of the tunnel, you catch the first glimpse of the scale of Mikri Spilia. High red walls enclose you in a perfect circle. And on the right, you can see the first of the two white churches. Agios Georgios.

Being inside the doline, you feel like you have entered a different world. There are many trees, plants, and birds. And the blue sky seems closer than anywhere else due to the contrast with the circular walls of red stone. It is a quiet oasis of peacefulness. And the natural beauty here is unique for the Greek mainland.

It is possible to hike the perimeter of the doline. Simply follow the path along the red crater wall. On your way, you will discover the second church, Naos Metamorfosis. A cave church, marked by white paint on the red wall.

Although Megali Spilia is the biggest of the twins, this doline is less accessible and impressive from the inside. Megali Spilia is at the bottom of the mountain called Didyma and therefore enclosed by a wall that is uneven in height. The walls are less red, the sky is less framed, and the bottom is less green. However, what this doline has that Mikri Spilia has not, is an impressive view.

Magali Spilia is not as much a place to visit as her little sister is. But it is the doline that attracts you toward the twins. You can see this hole in the mountain from far away, on the main road between Epidaurus and Porto Cheli.