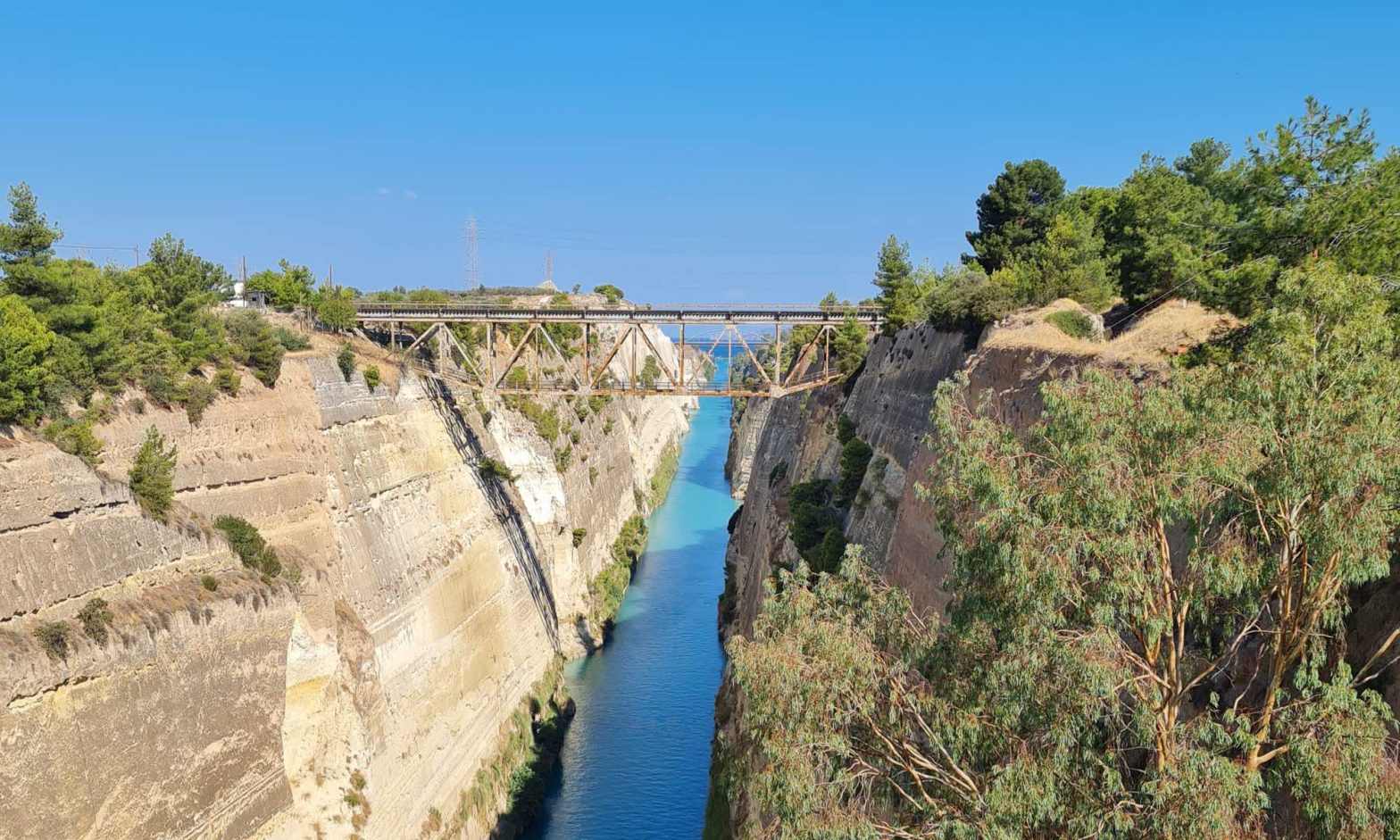 The most popular holiday destination on the Greek mainland, Peloponnese, is known as a large peninsula in the South. However, technically, Peloponnese has been an island for almost 150 years. The Corinth canal separates this famous peninsula from the mainland of Greece as a narrow straight line of clear blue water.

The Corinth canal is at the border of the most southern peninsula of Greece, Peloponnese. Just one hour West of Athens Airport. The waterway cuts through the mainland in a straight line. From Isthmia in the East, on the coast of the Aegean Sea (Saronic Gulf). To Posidonia in the West, on the coast of the Ionian Sea (Gulf of Corinth). With this location, this man-made canal connects the two main seas of Greece.

Peloponnese reaches far South of Athens and has formed a dangerous detour for ships throughout history. The round around the famous peninsula put 185 nautical miles (340 km, 213 miles) in between the Aegean and the Ionian sea. And it comes as no surprise that even the Ancient Greeks understood that the two seas should be brought together.

Periander, who ruled Corinth in 602 BC, was the first to imagine the Corinth canal. He tried. But digging a 6.4 km (4 miles) long waterway turned out to be too advanced for his time. As an alternative, Periander created a diolkos. Dia means across in Greek, and the diolkos was a paved trackway to move boats across the land. This diolkos was in use for over two centuries.

The second attempt to create the Corinth canal happened in 67 AD. Emperor Nero and a group of 6.000 (!) of his slaves started work at the side of Corinth. Historians believe that during this attempt, almost a tenth of the waterway was constructed. However, Nero died long before completion, and construction came to a stop for centuries.

The idea of the modern waterway arose in 1830, after the fall of the Ottoman Empire when the Greek economy wasn’t strong enough to start. In 1882, with the help of an Austrian company, construction started. But soon came to hold (once more) due to financial issues related to the Panama canal. In 1890, and with the help of a Greek investor, the Corinth canal finally became reality. It opened in 1893, on October 28.

The Corinth canal in use

After more than two centuries of waiting for the Corinth canal to be opened, it turned out to be far from the success everyone had hoped for. The only 21 meters (70 feet) width at the bottom proved to be insufficient for larger ships. Big vessels do not fit, and many captains have difficulty navigating through. Not only the narrowness of the canal, but strong winds and currents as well, make the waterway a dangerous place, even for smaller boats.

Besides, the steep 90 meters (300 feet) tall canal walls have proven risky. Even for the most talented captains. Rock debris often falls down into the water. Closing the passage for weeks, months, or even years. Today, you can see many man-made fortifications of the walls. As well as wider parts that are a result of big land slides. Fully functional the waterway has never been in the 130 years it is open.

Despite the Corinth canal being a struggle for most boat owners, for us tourists, it is a spectacular place to visit. The canal walls are impressively tall and steep, and the water at the bottom is incredibly blue. The scale of this man-made project is unbelievable. And the fact that a big ship looks small here, makes you question your own size like nowhere else.

The best-known location to admire the Corinth canal is the old bridge. A steel structure, in the middle of the canal, on the main national road between Athens and Peloponnese. Here you can park your car and walk high over the water. In the middle of the bridge, you can feel the scale of this project, and seeing a ship passing underneath you in the clear blue water is exciting.

For more excitement, there is an option to bungee jump, down along the canal walls. However, since my legs were already shaking of the height on the bridge, I will not be able to tell you about this experience. But if you’re not afraid of heights, please let me know how it is in the comments below!

What I can tell you, is that the famous old bridge is not the only place to experience the Corinth canal. It is the most popular one and makes the best Instagram picture, but it can be packed with tourists. I would really recommend you to visit Isthmia or Posidonia. The beginning and end of the waterway.

At the end of the 1980s, Greece constructed two unusual bridges at both ends of the Corinth canal. Reaching Isthmia and Posidonia, you might believe you have reached the end of the road. The clear blue water of the waterway blocks the passage to the other side, while a connecting bridge structure seems to be missing.

But when the last boat has passed through the canal, something incredible happens. Machines turn on, and from the depth of the crystal water, the silhouette of a structure appears. A wooden deck, complete with balustrades, emerges from the water. The bridge arrives. Cars, cyclists, and pedestrians can cross the water. Until the structure slowly dives back to hide at the bottom of the Corinth canal.

Isthmia is the perfect spot to have a coffee and enjoy the beauty of this tourist attraction without tourists, and in peace. The place is close to being abandoned. Which is hard to believe, coming from the over-crowded touristic old bridge, just 2 km (1.2 miles) away. Why have people stopped coming here? I think it’s a shame. At the old bridge, the canal is more impressive in size, but the best experience is found here. Besides, in Posidonia, the remains of the old diolkos are preserved!