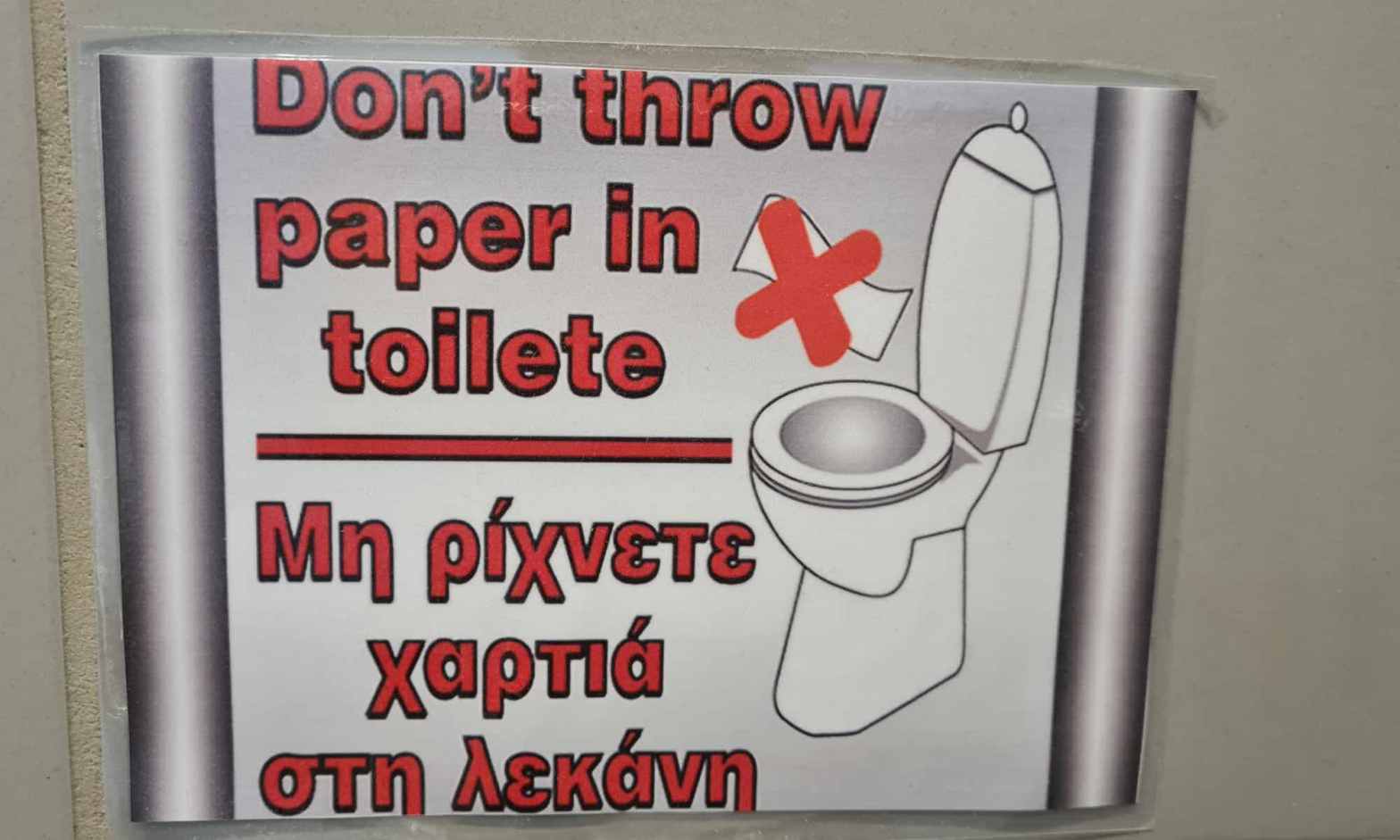 Greek toilets. What to prepare for

Whoever believes that going to Greek toilets is like visiting a restroom in other European countries, is wrong. The experience of emptying your bladder in Greece is unique and unlike doing the same thing in the rest of Europe or even the US. Prepare yourself for your next holiday and keep reading.

All over Greece, you can find signs, saying that you are not supposed to throw any toilet paper in the water closet and flush.

Did you ever wonder why?

The reason you can not flush your toilet paper in Greece is simple. The Greek draining system is not designed for it. The waste pipes are simply not wide enough. With only 5 centimeters (a little less than 2 inches), it is less than half of the pipes in other countries. Flushing toilet paper in Greece can easily cause constipation in the sewer system from which a whole town will suffer. So don’t do it!

It is normal for the Greeks

As an architect, however, I could not agree with the Greeks understanding this reason and not doing anything about it. Why don’t you use the paper that disappears when it is in contact with water? For what reason don’t you start building houses that do have a wide enough pipe to flush paper? Why doesn’t the government do something about it?

Turns out, that the Greeks don’t share this problem with me. They are so used to not flushing their toilet paper that it is just the most normal thing for them to do. So whenever my Greek family is visiting the Netherlands, I am cleaning their dirty paper.

Tips for when you’re uncomfortable

It might feel weird that someone else will literally have to clean your shit in Greece. Especially when the cleaning person is your new mother-in-law! I wasn’t able to go number two for a while when I stayed in Greece the first time. It just seemed too weird and confronting for me. However, my boyfriend gave me three tips.

Bring your own toilet paper

Although the Greeks accept collecting their dirty paper in a bin, they also understand that they are the only ones. They know that the many tourists that visit Greece each year, will either refuse or forget that they are not supposed to flush their paper.

As a result, even the most luxurious hotels will provide you with the shittiest quality of toilet paper. So when you accidentally flush it, not much harm is done. Understandable from them, imagine a stay in Santorini with sewer liquids and smells everywhere. However, it is not very pleasant when you stay in Greece. My tip: take your own well-layered toilet paper with you, and don’t flush it.

In many taverns, bars, shops, and other semi-public places, something strange is happening in Greece. The toilet door can not be locked. The first time I encountered one of these toilets I had the luck to be with some Greek friends who could explain to me how to encounter these types of toilets.

Apparently, it is very normal in Greece that toilet doors only close but can not be secured to assure your privacy. The main thing to remember here is to open the toilet door fully when you’re done. This way, everyone can see upon entering which toilet is occupied and which is free. Reducing the chance of someone entering during your private moment.

However, when someone does accidentally open an occupied door, the Greeks say “Ólous“. Ólous means everyone, but in this case something more like someone else. Remember this word on the Greek toilets to save yourself, as well as the Greeks, from an embarrassing situation.

Imagine you’re having dinner at a restaurant in a building that used to be an old train station. After about a liter of beer, you have to visit the powder room. The Greeks around you tell you to follow the train tracks for a couple of meters and you will find it on your left. Easy right?

I was in this situation during my first week in Greece. I followed the tracks, in the dark, surrounded by the sound of hungry stray dogs. After walking for five minutes there was a little building on my left so I entered. What I found was a hole in the ground and a green garden hose connected to a sink. Strange. I walked back, thinking I had missed the real toilet completely.

Later I heard that the place I had found was a real Greek toilet. Public toilets in Greece can be no more than a hole in the ground, a pit toilet. And the garden hose was just there to replace the bidet. According to the Greeks, this is actually the cleanest way to pee in public. Even though the toilets are not cleaned often, look terrible and feel like they came straight from the middle ages, you don’t need to touch anything. Making you immune to all the bacteria that live in there.

Besides the ancient treasures, paradise-like beaches, and picturesque villages Greece is known for, there is a fourth category of sites that should be on your travel itinerary. The religious sites.…

Paying by card is not as common in Greece as in other countries. Although quite a few places do allow card payment, some may not. Cash is the norm for…

Driving in Greece. The basics

No western driving school can prepare you for driving in the chaos that is the Greek traffic. However, I can truly recommend exploring this amazing country by car, since other…